Academics have designed a new facial recognition system that relies on the way light patterns reflect off the human face to distinguish between individuals, and on the speed with which the system reads the reflected light to detect forgery attempts.

The new system is named Face Flashing, and besides a camera, it also works in connection with an LCD screen, may it be a computer’s display, a phone’s screen, or an authentication panel at the entry of a secure location.

In Face Flashing, the role of the LCD screen is to display what’s known as a challenge. This challenge can take the form of a singular image shown on the screen or a quick succession of images or solid colors.

The role of the challenge is to emit a light pattern at the user’s face. This emitted light reflects on the user’s face —in the same way for each user, but different from person to person.

A nearby camera records how this light reflects off the person’s face, and passes the data to an internal component known as the liveliness detection module, and then to the actual facial recognition feature. 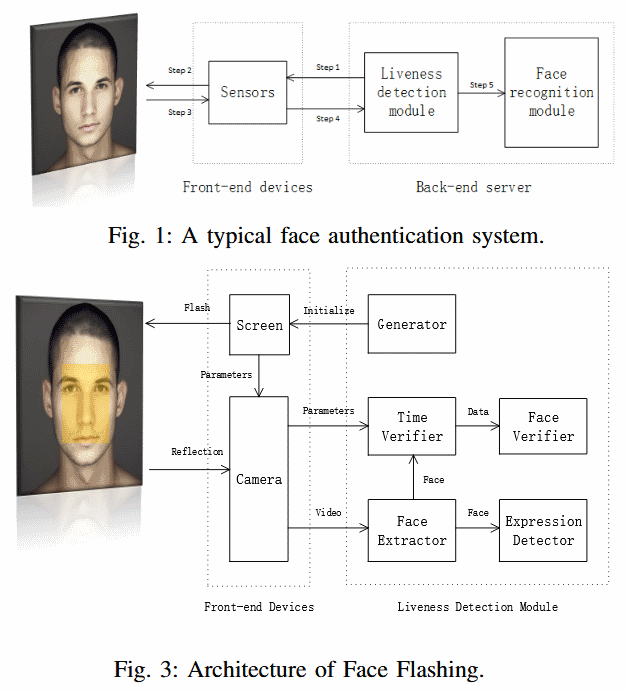 « Timing is the most crucial security guarantee provided by our protocol and is the fundamental distinction between genuine and fake responses, » the research team explains.

« Genuine responses are the light reflected from a human face and are generated through a physical process that occurs simultaneously over all points and at the speed of light (i.e., zero delay), » the team says.

Face Flashing is unique in its approach, but researchers also warn that relying on the light reflected of a challenge is not strong enough on its own, and that Face Flashing should always be used with a classic module that detects that the scanned face belongs to the proper person.

Overall, Face Flashing is a step in the right direction when it comes to improving current facial recognition systems that have too often been bypassed by flashing a photo in front of a camera .

« Our method has high accuracy in various environments and is robust to vibration and illumination, » the research team adds. « Experimental results prove that our protocol is effective and efficient. »

More details are available in a research paper named « Face Flashing: a Secure Liveness Detection Protocol based on Light Reflections » presented at the end of February at the NDSS Symposium held in San Diego, USA.