The exploit kit landscape has continued its downfall started in the summer of 2016 and its leading player —the RIG exploit kit— has stopped delivering any ransomware strains in 2018, focusing now on spreading cryptocurrency miners (coinminers) and information-stealing trojans (infostealers).

These are the main conclusions of months of observation by Palo Alto Network security researcher Brad Duncan.

Duncan, one of the leading specialists in malvertising campaigns and exploit kit usage, has been one of the first to notice the declining state of the exploit kits —web-based applications that facilitate the delivery of malicious code to vulnerable and outdated browsers.

The expert pointed out last year that the exploit kit market, which started a general decline in the summer of 2016, has continued to fall in the first half of 2017. In a blog post today, Duncan says that fall has continued all throughout 2017 and the first month of 2018.

No large EK operation has surfaced on the exploit kit market in 2017, but two major players —Sundownand Neutrino— faded out instead.

RIG has continued to dominate detections for exploit kit activity, but these detections are a fraction of what RIG used to get. Looking at Palo Alto’s internal data, Duncan reveals a sharp drop in RIG EK, activity from 812 monthly campaigns in January 2017 to only 65 in January 2018. 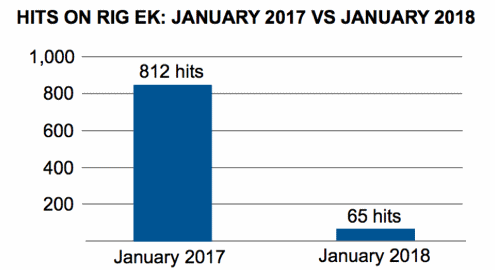 Duncan says various reasons contributed to RIG and the EK landscape’s downfall, such as modern browsers getting harder to hack, Flash use going down after major browsers switched to an HTML5-first policy, and several coordinated takedowns aimed at EK operations.

Even cybercriminals have noticed the hard times exploit kits are going through, and many have switched to email spam or social engineering (spear-phishing, tech support scams).

Currently, exploit kits are nothing more today than a dying fad with a strong clientele that continues to rely on them for spreading various sorts of malware strains. But even this clientele will abandon EK operators once they stop infecting enough users. Below is Duncan’s review of what’s left of the exploit kit landscape in 2018.

Barring the discovery of a slew of non-Flash exploits to power a new generation of EKs, all exploit kits are primed for extinction. Right now, all security researchers are rubbing their hands waiting for the end to come.

mar Fév 27 , 2018
These days it is not uncommon to find both adware and miners being installed together through adware bundles. These programs, though, are typically not created by the same developer and are just being included as different « offers » by the software monetization company. After examining a new malware sample that was […]