Even after many efforts made by Google last year, malicious apps always somehow manage to make their ways into Google app store.

Security researchers have now discovered a new piece of malware, dubbed GhostTeam, in at least 56 applications on Google Play Store that is designed to steal Facebook login credentials and aggressively display pop-up advertisements to users.

Like most malware apps, these Android apps themselves don’t contain any malicious code, which is why they managed to end up on Google’s official Play Store.

Once installed, it first confirms if the device is not an emulator or a virtual environment and then accordingly downloads the malware payload, which prompts the victim to approve device administrator permissions to gain persistence on the device. 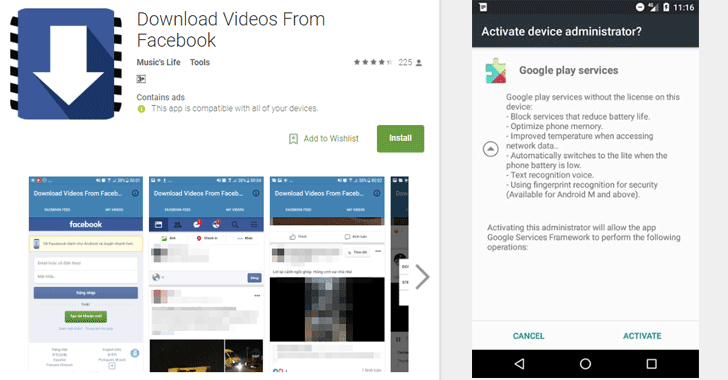 « The downloader app collects information about the device, such as unique device ID, location, language and display parameters, » Avast said. « The device’s location is obtained from the IP address that is used when contacting online services that offer geolocation information for IPs. »

As soon as users open their Facebook app, the malware immediately prompts them to re-verify their account by logging into Facebook. Instead of exploiting any system or application vulnerabilities, the malware uses a classic phishing scheme in order to get the job done.

These fake apps simply launch a WebView component with Facebook look-alike login page and ask users to log-in. Apparently, WebView code steals the victim’s Facebook username and password and sends them to a remote hacker-controlled server.

« This is most likely due to developers using embedded web browsers (WebView, WebChromeClient) in their apps, instead of opening the webpage in a browser, » Avast said.

ven Jan 19 , 2018
I have been seeing a steady trickle of these Fake SagePay subscription emails over the last few days. Until today all copies I saw didn’t lead anywhere with the links already dead by the time I had received the email. Today, either I was much quicker or the downloads and […]