Two years after Mirai, botnets have become the playthings of script kids

In September 2016, Twitter, CNN, Spotify, and many others were knocked offline by the biggest DDoS attack in history. Today we know it by the name Mirai, but no one would have imagined at the time that this attack was coming from a herd of Internet of Things (IoT) devices cobbled together to form a botnet.

Mirai was discovered by MalwareMustDie researchers in August 2016 . Although it was not the first IoT malware to be discovered, it is certainly the most prominent.

After taking down much of the internet on the east coast of the US, things got worse when the malware creator self-dubbed Anna-Senpai released the source code. Since then, motivated hackers around the world have used it as a framework to create their own variants of botnets. Eventually, the original malware creators were arrested and pleaded guilty in court, but the impact of the code release significantly sped up botnet creation. New variants started to appear, adding new functionality and exploiting a variety of vulnerabilities in unsecured IoT devices.

Any Skiddie can do it

Now we are two years after Mirai, and new variants are still causing havoc, destruction, and harm. Inexperienced hackers are making minor tweaks to the original Mirai code, deploying it, and amassing new botnet armies. In some cases, they even rent them as botnet mercenaries.

One such cybercriminal popped onto the scene in July of 2018 when several new variants of Mirai appeared, causing online discussion among security researchers. One of the participants was a Twitter account with no followers, who pointed out that researchers made a mistake in the Mirai variants classification. To prove himself he released a link with the source code of seven Mirai variants. This challenge motivated us to download the source code ourselves in order to classify and determine how different these seven variants really are from Mirai (spoiler: not that much).

Figure 1. The Twitter handle responsible for the code release

Mirai in a nutshell

To illuminate the differences in the Mirai variants, let’s do a quick recap of how Mirai works. The original Mirai code works as follows:

Since the majority of Mirai variants are copycats of the original Mirai code, they have a similar code structure. They have three main parts: the bot, the C&C server, and the loader.  The bot part is written in C, and the C&C module is written in Go.

For the purpose of this analysis, we are going to focus on the following leaked variants of Mirai: Akiru, Katrina_V1, Sora, Owari, Saikin, Josho_V3, and Tokyo and their three modules under the bot directory, such as:

All decoded passwords, strings, and additional information can be found in the complementary information at the end of this article.

Variant Analysis – What’s in a Name?

The Mirai code is a framework, like a template, and anyone who finds a new way to exploit a new device can simply add it which would create a “new” variant. The key variables in the botnets are the naming as well as the credentials it attempts, the architecture it targets, as well as the ports it turns off (kills) to keep other malware from gaining foothold in the device. To understand the differences between the variants, you can compare them to each other as in the table below.

Figure 2: This table contains a summary of changes per variant

Now let’s take a closer look at some of the differences.

All Mirai variants have an implementation of the successful execution check-string. Most of the variant’s check-string corresponds to the variant name. There are several exceptions, for example, the Tokyo variant has a default Mirai check-string, the Sora variant has no name, and Josho_V3 has a completely different name.

The original Mirai code used a list of sixty-two hardcoded passwords to perform a brute force attack (dictionary attack) against vulnerable IoT devices. The list is obfuscated and could be decoded with the DEADBEEF key.

Just like Mirai, all of its variants have a module killer.c which has several purposes. First, it gets rid of other malware possibly running on the current device. Second, it prevents others from gaining remote access to the device over Telnet, SSH, or HTTP. Analysis revealed that in addition to having the standard Mirai kill ports, five out of seven variants (except Saikin and Josho_V3) added a new protocol/device specific ports to their kill lists. These ports are: port 53413 related to Netis Routers, port 37215 related to Huawei HG532 routers, port 52869 UPnP SOAP service from a Realtek SDK, and port 81 for CCTV-DVR cameras. The addition of these ports would allow the botnet author to connect to more devices and at the same time prevent others from connecting to these devices remotely.

All the Mirai variants we looked at are targeting the same architectures as Mirai, and only three of them: Sora, Saikin, and Akiru added two new architectures: ARC (Argonaut RISC Core)  and RCE (Motorola RCE).

After examining Mirai and its variants a bit, we became interested in trying to understand who was behind the variants and the twitter handle that shared them.

Going down the rabbit hole to find the skiddie’s name

After reviewing the code, an analysis of which is contained later in this post, it was fairly easy to see that while this code was capable of doing a lot of damage, it wasn’t remarkable in its variations from the original Mirai source code. It took advantage of some of the modular architecture of Mirai to potentially crack new devices and set up defensive posture in the devices that it is trying to infect, but it didn’t present anything that was really new or noteworthy.

What interested us primarily was learning more about how this botnet author worked, so we decided to build a case for determining the identity of the author.

At first, we suspected that the person behind the 400kQBOT Twitter handle is the known threat actor and creator of Owari/Sora who once identified himself in an interview as Anarchy. He was also known as Wicked.

However, by simple googling him, we stumbled upon some other information which seemed to point in a different direction. We found another directory containing leaked source code of Mirai variants that was virtually identical to the samples 400kQBot leaked. Among the compiled sources of Mirai variants, compilers, and tutorials about how-to compile Mirai source code, we found a text file with the following message. The author signed himself as Scarface#1162.

Figure 3: The message from Scarface#1162 the next Senpai to all kiddies out there

A simple name search revealed that Scarface#1162 is not only doing “charity” work writing and releasing botnet source code for skiddies, he is also renting access to his botnet as a service. 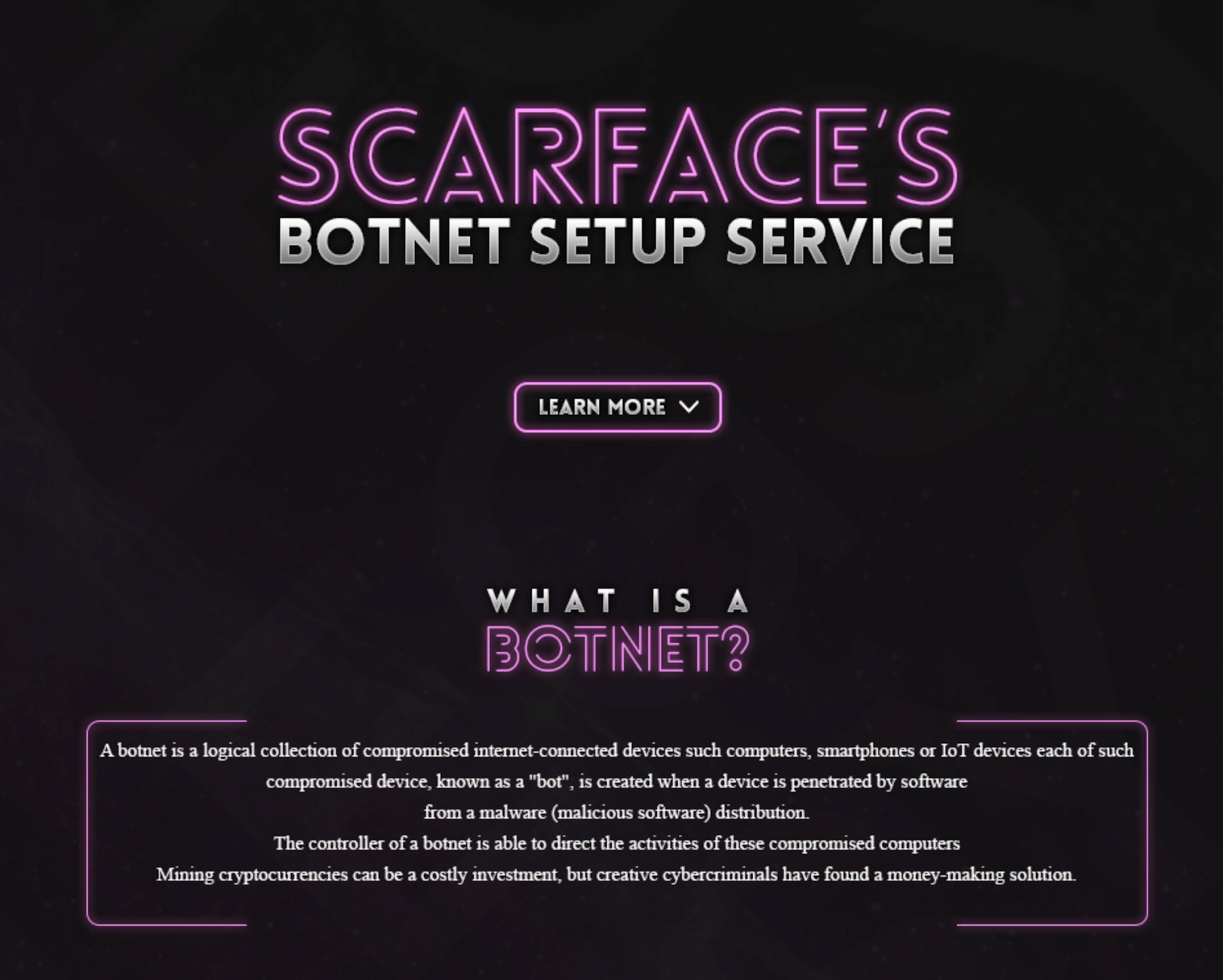 He also has a YouTube channel where he demonstrates his hacking skills taking over the botnets of other skiddies. In one video, he shows in real time how he took over the Akiru botnet and then informed its creator, our old friend Wicked, in a chat app channel for “money team staff members”. In addition to Wicked, another familiar name caught our attention: Anarchy. So, maybe Wicked and Anarchy are not the same person after all, but two different people from the same team.

Our suspicions that 400kQbot and Scarface were the same person was confirmed when in mid-September, he identified himself in a tweet from the 400kQBot handle. 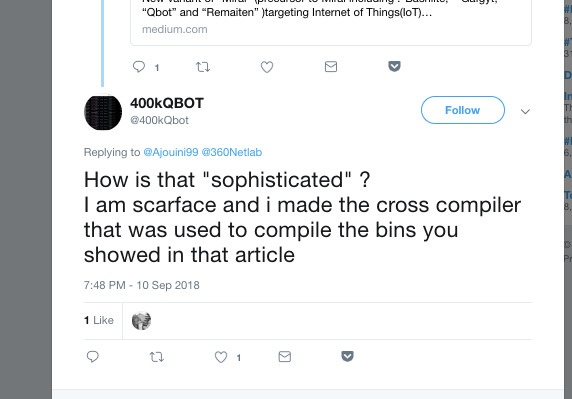 So, now we were on to something. Scarface is emerging as a new and fairly destructive botnet author, and one with a penchant for engaging researchers and press. But we are still no closer to understanding who he (or she?) is.

We zeroed in on a clue we found in researching the code. When Mirai attacks a device, it uses a check string as a sign of successfully finishing a sequence of commands. We have no information how the Scarface got access to these variants, nor we can not confirm if he is the author. For example, one of the variants, Josho_V3, has a different successful execution check-string: daddyl33t: applet not found.

For those who have never heard the story,  daddyl33t was a 13-year-old teen looking for a freelance job in development who tried to hone his scripting skills by compiling the QBot botnet. Perhaps the 13-years-old-fame-seeking skid is also a part of a money making team with Wicked and Anarchy. Perhaps they are all the same person.

We find ourselves with several options and connections to consider, but none that point us in a certain direction. Is Scarface trolling us all as he adopts different pseudonyms to go with different malware strains? Is he one and the same as daddyl33T or just mentioning him as a tribute? The exercise left us with some leads, but not enough real information to draw any conclusions.

In the end, it is mere speculation to explore who the real person is behind an anonymous twitter or discord handle, and perhaps that is not the point, but that is also not that material. What is interesting is that it was so simple to create several botnet variants using publicly available code and then market them for profit and attention.

It is laughably easy to create variants of Mirai off the leaked source code, and it is not that surprising to see budding cybercriminals monetizing their botnet armies. A botnet is a versatile tool that can be used to launch a DDoS, cryptomine, or act as a malware proxy.

To read the original article: https://blog.avast.com/hacker-creates-seven-new-variants-of-the-mirai-botnet