These type of DDoS attacks are possible because of the unsecured way Memcache developers have implemented support for the UDP protocol in their product.

Furthermore, to make matters worse, Memcache servers also expose their UDP port to external connections in the default configuration, meaning any Memcache server not behind a firewall can be abused for DDoS attacks right now.

Memcache servers can be abused for reflection DDoS attacks

Cloudflare says it detected several DDoS attacks carried out via exposed Memcached servers in the past few days.

The company explains in a technical report that crooks send small byte-sized requests to Memcached servers on port 11211. Because the UDP protocol wasn’t implemented correctly, instead of responding with a similar or smaller packet, Memcache servers respond with packets that are sometimes thousands of times bigger than the initial request.

Because it’s the UDP protocol, the packet’s origin IP address can be easily spoofed, meaning the attacker can trick the Memcache server into sending this oversized response packets to another IP address —the DDoS attack victim’s IP.

In the DDoS community, this type of DDoS attack is named reflective DDoS or reflection DDoS. The amount of times the response packet size is amplified is the DDoS attack’s “amplification factor.”

According to Cloudflare, Memcache-based reflection DDoS attacks can have amplification factors up to 51,200. The company cites recent DDoS attacks launched against its network where attackers sent 15-byte packets and Memcache servers responded with 750kB-packets in return.

This amplification factor can vary, though, depending on the attacker’s ability to craft malicious requests that trick the server into responding with bigger and bigger packets. 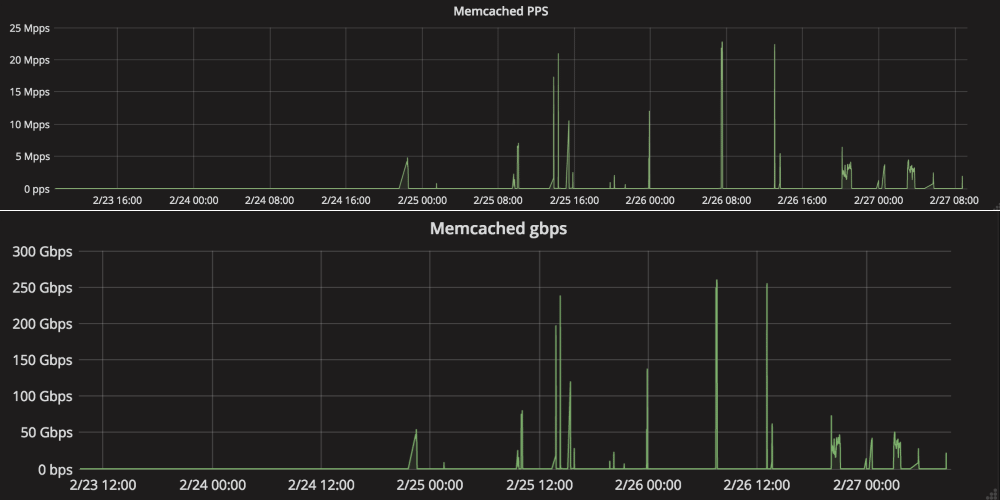 “This is massive for a new amplification vector,” Majkowski said. “But the numbers don’t lie.”

Over 93,000 Memcache servers ready for the taking

An amplification factor of 51,200 is enormous. There are other protocols and technologies that can be abused for reflection DDoS attacks, such as DNS, TFTP, LDAP, CLDAP, SNMP, BitTorrent, and others.

Amplification factors usually range from 2 to 10, with the biggest reaching between 50 and 100. Rarely you see a reflection DDoS attack with an amplification factor of over 100, let alone 10,000 or 50,000 as is the case with Memcache.

This wouldn’t be a huge problem if Memcache wouldn’t be a popular web-page caching solution. Bleeping Computer found over 93,000 Memcache servers easily accessible online. The good news is that this number is down from over 134,000 that were available online in 2015.

Security experts are recommending pleading with Memcache server owners to disable their UDP port if they’re not using it and place these servers on private networks, behind firewalls. To get server owners started, Cloudflare has included simple steps on how to disable Memcache’s UDP support in their recent report.
To read the original article:

mer Fév 28 , 2018
A new Android malware strain named RedDrop can perform a vast array of malicious actions, including recording nearby audio and uploading the data to cloud-storage accounts on Dropbox and Google Drive. The malware was first spotted by UK mobile security firm Wandera on the phones of employees of several global […]